How to design a bathroom

Bathroom is no longer used just to wash moreover it became the main designer's interior room. That what proves our items selection.

1. Designer David carter wanted bathroom in his own flat look like an italian palazzo interior. Though he purchased a French bathroom in Empire style and invited English artists to ornament the walls. As the result it looks a bit cosmopolitan and melodramatic and stagy.

2. Designers Stephen Sills and James Huniford considered the Middle West climate too soft to let the doors of a bathroom look into the garden. They bought a French bathroom - antique marble "sarcophagus" and for the French chandelier of the previous century in Europe.

3. The flat in Chicago was designed as home museum to place the owners' collection. The batroom and wardrobe are the unique areas in the house where there are no masterpieces. These two rooms are  come across to each other and divided by two sliding doors that remind Japan partition ones.

The most of the bathroom was used to the maximum. They did not economize on the materials and area: around the bathroom they created a real waterfall composition in Right spirit. With the gutter with running water on the ceiling they united sinked into a high runway bathroom and spacious shower cabin. There is enought space but less organized: barthroom and shower cabinet form angulation. All together they look dynamic and original.

5.6. In 1938 the architect Felix Brunau decorated two bathrooms for English King George V and his spouse queen Marie in the palace in the embankment d'Orsay in Paris. During their travellings the Royal family took shower and cleaned their teeth in accordance with an old tradition: the Queen was in a "silver" bathroom and the King was in "golden" one. Now the palace is a location of the Ministry of the Foreign Affairs of France.

7. Bathroom of the house of the designer Darryl Carter is a nice decision of a couple of individualists who want to be together even in bathroom but tend to keep the distance. The accent is put onto two white antique bathrooms with retro shower mixers. The furniture is only one wardrobe so big and that bath belongings and towels there will be enough for a whole footbal team.

8. The fact it is an artist room can be seen at first sight. Daggy Fields colorfully painted his London's apartment walls and the ceiling in the bathroom by himself. The is also "smudged" with colors. For not for  asingle moment to lose touch with art the owner covered the walls with paitings and pictures. This variant will suit only those ones who are have "nerves of steel".

9. This townhouse bathroom in London was designed by Kelly Hoppen. In the center there is a round bathroom by Claudio Silvestrin standing on the floor made of limestone and white marble. " I am not a minimalist but this is  a kind of luxury for me: a combination of elegance and high-quality materials" said Hoppen.

10. In bathroom of one Parisian collectioner Bill Pallot the mood will chande even if the person is an over pessimist. plastic furniture, bright pop-art colors and lithography of Warhal that is a real paradise for 60s desing admirers. Though transferring examples of this kind in your bathroom one shall be attentive: one thing is precious for a collectioner but for citizens it is death.

11. This bathroom in the Themze embankment was projected by the architect John Young. In the round centre there is bathroom made of Japan cypress. The high-tech admirers can fully value the glass bricks walls on the steel skeleton and stainless bathroom fitments placed along the perimeter. Transparent bathrooms fit to those ones who are without complexes.

12. The bathroom in a Kent County is ideal for the classical music amateurs. The wooden walls are colored with brown color and intentionally and negligently paperred with music notes leaves. Here it is possible to stydy music relaxing in a bath. Accessories also shall agree with music theme - here perfectly fits the favourite composer and decorative panel representing music instruments. Annoying repertory is ease to replace just buying new wall papers.

We are grateful to the AD Magazine for an interesting article and suggest you a little selection of bathrooms to your choice with antique and vintage elements.

Pay some attention to the items listed below perhaps they can suit your bathroom :) 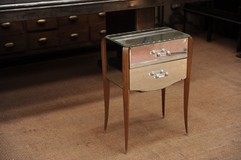 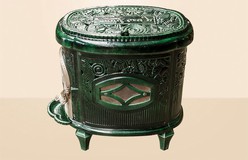 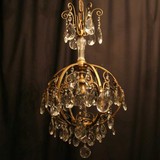 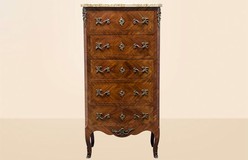 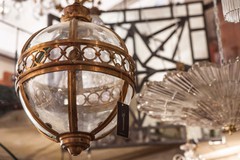 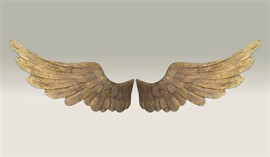 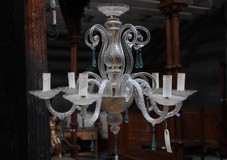