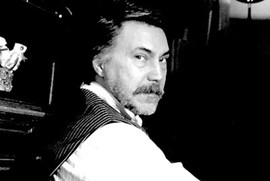 Rustam Khamdamov is an iconic fugure without any exageration. A person with a sense of style. An artist, couturier and designer, director and aesthete. Legendary and weird. Charismatic aristoctrat in great sense.

Rustam U. Khamdamov is a great film director, scrypt writer and artist. He was born May, 24th in 1944 in Tashkent city.

A laureate of the "Triumph" award (1966). In 2003 he was award to the Grand Prix " Cultural Heritage Grand Prix". In 2003 he become the first Russian artist who's paintings The State Hermitage Museum (St.P.) exhibites in its modern art exposition.

A honorary member of the Academy of Arts.

The graphics of R. Khamdamov are presented in the State Tretyakov gallery and in the Zimmerli Art Museum of Rutgers University (The USA), in the National Museum in Ravenna (Italy) and as well as in numberless collections all over the world.

The movies shot by R. Khamdamov:

1967 - "My heart's in the Highlands" ( after William Saroyan play) but was the only author of the real screenplay and author of the costumes and streamers and decorations. (R. Khamdamov was a student when he shot this film, the camera negative is lost).

1974 - "Nechayannye radosti" by Andrey Konchalovsky (the flm is not finished, the negative is lost and recycled by Nikita Mikhalkov as "a Slave to Love" (Raba liubvi).

1991 - Anna Karamazoff, wrote the scrypt (the film was arrested by French producer Serge Silberman because there were some disagreements upon two versions to show in Cannes)

2010 - The Nutcracker and the Mouse King (directed by Andrey Konchalovsky) as costumes designer.

2006 - The play "Dependant" on the stage of the Moscow Mayakovsky theatre, art-derector ( I. Popovsky director, executive art-director V. Kruchinina).

"Can you imagine what he has been through?! Inspite of this he went on drawing his fairy-tale. When I firstly came back from Moscow and from Russia in whole, I always carried with me precious drawings and sketches of Rustam Khamdamov. I showed them to Visconti, Fellini, Antonioni and they were delighted adn fascinated too. In my garden now I have his icon and enormous stunning bowl with pears, one of the outstanding paintings of his!  he is and artist of the first water, gifted from One Above with a great talent of artist, painter, film director and designer. And the most incredible thing in him is the deepest mystery of his personality".

" I can tell you more: the painting " My heart's in the Highlands" had a significant imprint on me that all the time I spent working on the "Nest of gentry" I was under its spell. I looked at this painting several times and every time I coud not capture what and why I was so enchanted, so excited and makes me dizzy. But there was always something special.."

"I think I would not talk but only about Khamdamov...When I am asked "Who is your teacher? Who revealed your talent? My answer is usually the same: perhaps it is a mass of people but firstly is Paradganov and Khamdamov".

"He is well-know al over the cinema world. The great Italian Luchino Visconti died in a room filled with Khamdamov works. Famous scrypt writer and a friend of two grand directors Tonino Guerra worshippes R. Khamdamov's gift and human dignity. In cinema, painting or graphic arts he is an artist..." Natalia Dardykina, "The Moscow Komsomolets" magazine, nr 25359 from May, 25th, 2010.

"...Gifted, mysterious and teasing uncompleteness compose Khamdamov personality as a myth, a character, more a ghost than a real figure..though there were written many articlesabout him, his movies fragmnets are quoted by the best directors of the world cinema. "The spell without any explanation" said A. Konchalovsky. Chary of praise to the colleagues sometimes  acid-tongued (and that never came together with his real attitude to a person), he is afraid of the crowd's attention, hides himself from the paparazzi.. He really lives in seclusion. For months and weeks he does not pick up the phone, make a public appearance, painfully withdrawing into shadows. he can simply disappear in anothe city, stick to the bar counter with anybody and stay at their home. Meanwhile that evening someone is going to look for him running off their legs because in his honor there have gathered some guests in a showroom or at movie screening to show their admiration. His mad worshipers untill their death will follow him everywhere he goes and he will not appear. He will make his relatives and friends worry about him that has happened something outrageous. How to explain them that our hero is a bit tired and he is out the play and he needs to hide away, get lost in a "public lonelisness" due to those ones who have betrayed him can not find him this night'.

Rustam Khamdamov is one of the most mysterious personalities in Russian Modern Art. in every showroom adn at every art-party they will talk only about him, every "respectable" Moscow flat there is at least one of his paintings and every well-bred person at any rate once heard about him...but no one can boast with a definiteness. Less people can tell something themselves. And the last category (the minority) can get some true-to-life information. R. Khamdamov is adored by his friends. His top-artist level is admitted by his enemies. But it is all is whispered, it is a tongue twister and snatches of phrases. He is unconvenient to everybody. He is catastrophically unreliable, he is able to break his own exhibition and every event. Uncontrolled, unsteady, unreliable that is a small list of "un" epithets that describe Khamdamov. But an artist talent overweighs his losses and those who criticize him secretly posess two or three his works. Khamdamov is an incredible stylist and extremely talented artist. He seems to draw and design since his birth. Though he did not graduated from any Art Academy he is still self-taught artist (that a practiced eye of a specialist discovers at first glance in his paintings) but the top-level talent easily copes with all the minuses and lacks. He is unlikely able to create a picture: all his personalities are relative and mannered and the main in his paintings is not personalities not the environment and composition or color. They say that all his work-of-arts (except the series "The trees") were created to pay attention to the specialty I mean the costumes. Only costume creates a special atmosphere in his paintings. there are no people in his works only mannequins who he dresses up. It seems that he is able to embellish even an elephant and leggy blondes eat their hearts out. Take a look at a Khamdamov's painting and you will see the edges, the textile texture and almost phisically feel his Majesty Style. The same thing is with films, the main is shot and in the shot there is an incredibly weird and crazy style. That differs the Khamdamov's art  from the other directors. With one word I can determine his art, it is a real beauty in its original state. During three years (from 2004 to 2006) he had worked on his albums "Copybooks" ("The paintings to different costumes", "Graphics and water colors", "Painting". These albums compose the unique edition giving a practical Khamdamov presentation of Khamdamov-artist. Read and enjoy: Khamdamov. Straight from the sourse. Editor"

Editor remarks to the albums of R. Khamdamov.