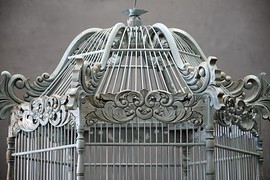 Today we are talking about birdcages..Such a great deal of shapes and dimensions they have got through their so long history from their invention up to the present!

It all began from..

In the far-far away past since humanity got interested in birds and then there arose a comprehension that birds shall live in their own houses or places. An idea of bird dwellings came to their minds. It seemed so easy to make the living of a bird in captivity much comfortable and people come to the creation of the bird houses with all the responsibility. There was all from the simplest square base made of brush canes up to artistic architectural constructions equal to the up to date dwellings.

The earliest birdcages were built for the fowl to keep them apart from the savage animals and prevent their escape. Firstly the cages were cubical with a wooden basement and ropes were used as bars and made of bamboo or reed. The cage dimesnions were big ones as dwelling and small ones for easily bird transportation to another place. Because there existed really dangerous and respected bird meanings such as canaries in the coal mines for instance. The bird was laid down into a mine where was always some activity and it usually warned about every danger like poisoning gas or fell dead to warn the miners about an urgent evacuation.

The nations around the world created different birdcages.

The ancient ruins in the North-West of a mexican state Chihuahua in the place named Paquime or casa Grandes can boast with a great deal of bird pens and wires. Untill the first Spanish crossed the Atlantic Ocean the indigenous people that lived in the territory before Columbus came there they favoured scarlet Ara parrots. The archaelogists that carried out the excavations in the living areas of ancient indians of Paquime who built their houses from adobe (clay mixed with straw), within the period from 900 till 1340 BC, found something really special! Besides the remains of the dwellings there were discovered 56 adobe little houses for Ara parrots. And taking into consideration that the living area of the parrots was in 500 km further this place. The bird bars were built from the same material as people's dwellings and were of a smooth shape and non-rounded edges that with their exterior reminded the flowerpots.This bird house was supplied with a stone or cork door and maintained a comfortable coolness inside. The local people actively fed the parrots because of their feathers valued as the main part of ritual robe and headgears. Such kind of bird houses imitated the living area for parrots in the wildlife like voids and hollows of the trees. That allowed the birds fell protected and as if they were free. People took care of the comfort life of birds. This stream spread furthermore all the round the world and bird houses united simple design solution and comfortable living conditions for the fowl.

During the centuries the interest to the birds domestication changed and in 17th and 18th centuries there increased a demand for exotic birds, this became a mainstream especially among the nobles. To underline their welth and status in the society they used to buy parrots and other birds coming from far far away overseas. Birds were devided into species and played different roles into their patrons' lives:songbirds served as background decor that brought joy to ones ears. The birdcages could be moved to another room following their owner. That was the first example of music entertainment, a kind of live record player.

Other unusual birds were a sort of delight for eyes. Sure design and style of birdcages assumed much improvement. To show the reachness of the owner evolved from "boxes" with bars to magnificent, wild and sometimes hauty and solemn architectural constructions. Like gorgeous birds, worshipped and respected, their dwellings became pretentious and complicated. Many cages looked like monumental buildings copying architectural world wonders like the Taj Mahal, the Eiffel Tower and just beautiful manors.

The decoration of the birdcages began in the 14th C in Europe. Moreover upon the opinion of the experts and collectioners the Frenchmen and Dutchmen. In France there was established a guild of artisans who created only the birdcages made of iron or brass wire. At the same time elsewhere in the world people made the birdcages of the bamboo, wood and vines, rattan and wood. In the 17th C all the cages were richly decorated and embellished. Each bird cage became an interior object. The birds houses could be mahogany ones and brass and to decorate them they used porcelain and silver cups. The cages could be compared with chests of drawers or display and without any doubt they pleased their owner and their guests. The evolution of the esthetic side of the cage  people forgot about the needs and comfort life sustenance of their birds. Their dweling was nice one but a kind og dangerous. The colors based on lead and aresenium could not proveide long-lasting existence of the nurslings. It was amazing but the birds survived under those conditions.

In the Victorian epoch the cages popularuty outshone the birds themselves. There appeared luxurious cages with mechanical birds inside that spread the wings and sang and jumped. Such gorgeuos gift was the best one especially for wedding.

In 20th C the budgerigars and canries conquered the fashion. The cages became simpler, convenient and clean. The esthetics gave the the place to practice. The bird dwellings became a nice accomodation again. Only the shapes differed in round and square ones. The round shape was banned in the USA because birds did not feel in safety there. The birdcages were made of tin and then plastic but they could not be long-lasting.

Nowadays the cages are made of lightweight metals such as steel and provided with all the necessary things for a comfort living of a creature and to make the care easier, the cages have more space and they are less dangerous. It seems that today we face our ascendents experience and we have come back to their beginnings and the construction of the first bird dwellings prooves to be the right one with their strict and definite lines and comfort in daily life.

The antique cages can tell us much enough about their epochs and they are still wished and in hugh demand up to the moment. One cage of that kind can accomplish an interior. Today these cages exceptionally serve as art objects because it is extremely dangerous for birds living there. You could not but agree that it is a great pleaseure to have at home a small part of the past besides when it is so original and unique one.